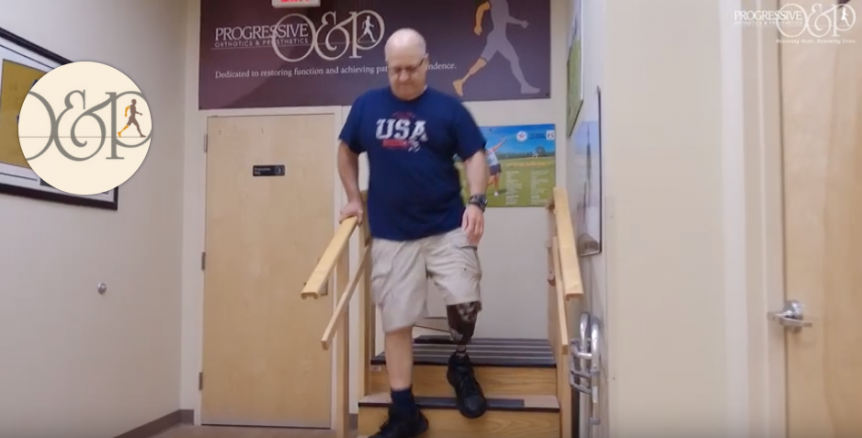 Long Island, New York, October 22, 2019 – Navy Submarine Veteran Rich D. cracks another one-legged man joke as he shows off his patriotic prosthesis donning an American flag and bald eagle.  Having lost his leg to diabetes one year ago, Rich credits his sense of humor, “can-do” attitude, and military training for helping him transition to life as an amputee.  And he’s not just getting by; he’s thriving.  Instead of letting the loss of his leg hold him back, he’s actually using it as fuel to push himself towards new goals and encourage others going through similar trials to do the same.

We sat down to talk about it.

After I retired from the navy, my ongoing battle with diabetes led to neuropathy and serious bone infection in my left foot. My podiatrist referred me to a vascular surgeon who told me it required amputation. Twenty minutes later they were scheduling the surgery. My time in the military taught me that things don’t always go as planned, and this was just one of those things. I was going to close one chapter and open another. You have to move forward; you can’t look behind you and you can’t change it. I was more concerned with how my wife and kids were going to react. I had to be there for them; so instead of dwelling on it, I started planning for our new future.

What was your first introduction to Progressive O&P?

When I woke up from my amputation surgery, Sal was standing over my bedside with a smile on his face and a pamphlet in his hand. He reminded me of a car salesman at first. But as we started talking, I realized he wasn’t there to sell me a product, but to provide a solution and to start a relationship. He took the time to just talk with me and answer my questions. I learned we had a lot in common, including the fact that his father was a veteran. That type of care and concern was a game-changer for me.

How was your first Progressive O&P office visit?

My first day at Progressive O&P was the same day that I got checked off by the vascular surgeon; they took out my staples and my wife wheeled me into the Progressive office. There were several folks in the waiting room and I just had a different feeling about this place. The walls were covered with accolades, newspaper articles and pictures of Dan conquering the world with one leg. I was floored. I immediately realized that these are the people I wanted to put my trust in for my prosthesis.

Before I was able to get my first prosthesis though, they gave me a “shrinker”, which is like an elastic sock you roll up over your limb. I had to keep it on there for a few weeks while I started my physical therapy. All the while, Abe put me at ease and showed me empathy.

What part did being a veteran play in your recovery and treatment?

Progressive O&P has experience working with veterans. Abe told me that because I was eligible for VA benefits, I would receive some of the best “toys”, aka top prosthesis. This was great news! I couldn’t wait to throw away my wheelchair and walker! It was a combination of my military training, college experience, and pure necessity that helped me set clear goals and get through rehab.

I went to an acute rehab center at Mercy Hospital. They said it would take me four weeks to complete the program. I said I was going to do it in two and I did.

My first day there they wheeled me next to a young man with red hair.

“Mind if I call you Ginger?” I asked.

He was down and out following a bad accident and an above-the-knee amputation. He had also been there a month, so I asked if he’d show me the ropes. He needed a friend and I found ways to encourage him and build him up.

We fed off of each other, and I continued to push myself because I was determined to get out of Dodge. Although I was apprehensive doing new exercises, if they told me to do six reps, I’d do ten, ten reps, I’d do twelve.

Who is part of your team?

In addition to the Progressive O&P team, my wife Wendy and my two sons, Zachary and Michael, are my support system. My wife was such an inspiration; she really helped the family to adjust to life after amputation. We’ve laughed and cried throughout this process but the time for tears is over.

My first prosthesis was heavy and inflexible. It was purposefully made this way so that I could get used to working my quads and using my knee. I have since had three more prostheses. My current prosthesis allows me to live an active lifestyle and do everything I need or would like to do. But at Progressive they’re always looking for better ways to take care of you, which means being at the forefront of technology. On one of my recent visits to Progressive, Abe was raving about some new technology that involved crafting prostheses from the same indestructible graphite material that they use to make helicopter blades. I was impressed with his knowledge and enthusiasm, but think I’m going to keep my prosthesis for now haha.

What things changed for you at home?

Prior to my surgery, my long battle with diabetes meant I was often pale and sick. But after the amputation, I became more vibrant and was getting stronger. I actually went a little stir-crazy in my house for a while, ordering a lot of things on Amazon and having groceries delivered to keep myself busy haha. Comedy and laughter kept me sane. I remember when we initially installed a ramp in the foyer of our home so I could answer the front door. Visitors would come ring the bell and it would take me a bit of time to get to the door. When I finally got there I would tease them for ringing the bell so many times. It was a running joke.

The smallest things were a challenge: getting over door saddle thresholds, getting out of bed in the middle of the night, going to the bathroom. I had to relearn everything. You can’t look back; it’s just not helpful. You have to look forward and make short-term goals. It’s not a race, but you will get there. 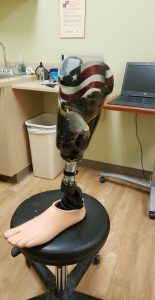 Have you utilized social media?

I began using social media for the first time post-surgery. Friends and family wanted a way to keep up with my recovery, so I started using Facebook to more easily share updates and document my experience. I remember my first post announcing, “I am now a one-legged warrior!”

The more I opened up on social media, the more people reached out with questions and encouragement. It really brings people together. I enjoy sharing practical advice for amputees on there, like where to buy off-the-shelf jeans that will actually fit over your prosthesis.

What would you say to those that have given up on prosthetics?

If you’re giving up on prosthetics, then you’re giving up on life. The buy-in is mobility. You can go anywhere you want with a prosthesis; it shouldn’t hold you back! At Progressive O&P they have big ideas and a positive attitude. You may come in there feeling defeated, but you’ll leave more empowered.

Last September I walked a 5k. It felt great! I want to encourage other amputees that it’s not about how fast you go; it’s about making progress. You’re going to have your family and support system there at the finish line no matter your pace.

Because I’m athletic, it’s important for me to take good care of the foot I have left. I want to invent a type of footwear for single amputees that will protect them from getting abrasions and ulcers on long walks or during medium to heavy activity, so they don’t become double amputees.