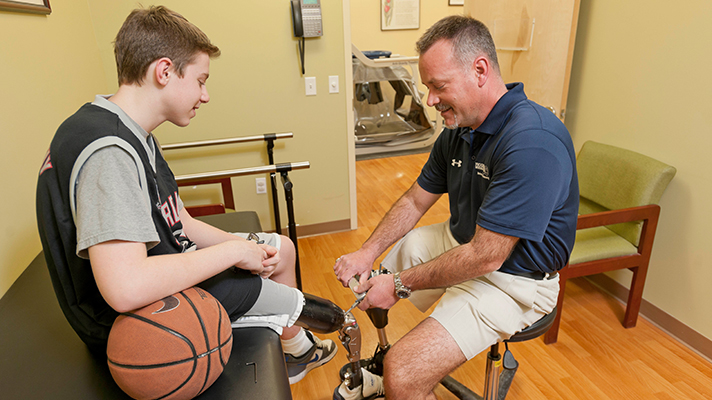 Fighting cancer is a fight few can imagine, particularly when it comes to pediatric patients. This man faced his illness head-on and made a bold decision that not only changed his life for the better but motivated him to show others that they could live their lives to the fullest.  Dan Bastian is from Poughkeepsie, New York, and is one of a family of nine children. Bastian was an avid athlete as a teenager. He played basketball, football, and hiking.  During the winter season, Bastian noticed that he was feeling significant pain in his right knee.  Bastian’s father was a dentist and sent him to a friend who was a radiologist for him to make an X-ray.  Doctors discovered a tumor in his right femur that had almost penetrated to the bone.  He was immediately taken to the hospital so the doctors could have a biopsy. They diagnosed him with osteogenic sarcoma, an aggressive form of bone cancer.  Oncologists at Memorial Sloan Kettering Hospital told Bastian, 15, that he had about six months remaining.  (Courtesy of Camile Sardina) (Courtesy of Camile Sardina) “Absolutely devastated. I could not imagine that. I was extremely active, practiced sports, did everything I wanted and then they told me that this was over, I was extremely distressed, “Bastian told the Epoch Times.  Bastian went through a year of chemotherapy in New York. He was understandably devastated and hopeless.  “I sort of sat with my head down and I was like this, I just assumed my life was over. That was it, I was just waiting. I have seen many children die near me in hospital rooms. They just took them out, and that was it, “recalled Bastian.

For Bastian, this was the turning point. The moment that led him to overcome his illness.  He had tremendous support from his family. His brothers visited him on weekends and his older brother was particularly sympathetic.  Every time Bastian had to spend the night in the hospital, his brother was by his side. He would quit the job to take Bastian to Yankees baseball games when he did not have chemotherapy that day.  After six months of chemotherapy, the doctors removed the tumor and a large part of the femur, the tibia, and the knee, and placed metal rods on his leg.  Bastian underwent 18 surgeries during the later decade in an effort to save his leg. During this time, he tried to continue living his life.  He met his wife in college and they got married when he was 23 years old. However, Bastian’s quality of life was deteriorating.    “At 25, she was becoming my nurse and I could not live with the pain anymore. Finally, my wife and I decided to amputate my leg, just amputate it and get on with life, “recalled Bastian.  The surgeon who performed his previous surgeries called Bastian “quit” for wanting to amputate the leg.  Then Bastian sought another surgeon to perform the amputation. A week and a half later, he left the hospital with a prosthetic leg.  Six weeks later, Bastian was riding a bicycle. Three months after that, he was practicing downhill skiing.  (Courtesy of Dan Bastian) (Courtesy of Dan Bastian) “I just made that big change of life. I’ll learn how to use this thing [the artificial limb] and I’ll learn how to do it in the best possible way, “Bastian recalled having thought of this after his amputation.  “I got my life back. I went back to being active, doing everything I wanted, without pain, “explained Bastian.  He began volunteering at Memorial Sloan Kettering Hospital, advising pediatric patients who would become amputees.  He assured them that their lives were not over and that they could continue to do the things they loved after their amputations.  “I, first of all, do not see myself as an amputee. I’m just a guy who happened to have lost a leg and I just found different ways of doing things, “he said.  At the time, Bastian was an IBM systems programmer. However, after volunteering at Memorial Sloan Kettering Hospital, he found his vocation.

His wife was totally supportive. He left his job at IBM and returned to school at the University of Connecticut, where he graduated from prosthetics.

In 1999, Bastian and his business partner, Sal Martella, founded Progressive O & P to help other amputees.

“Throughout my life, many have helped me tremendously. I just felt like I needed to reciprocate. I needed to help people who were in the same situation, “explained Bastian.

Bastian is passionate about his work and eagerly awaits to go do it every day.

“I never tire of seeing someone take the first step again after an amputation,” Bastian explained.

Bastian talks to many patients who are considering an amputation. He tells them his story, but then lets them make the decision for themselves.

For those who undergo an amputation, Bastian is convinced that through the prosthesis, all amputees can live their lives to the fullest.

He has a patient who has been with him since he was a child. One day he called Bastian and asked what was the melting point of his prosthesis.

Bastian was a little surprised by the question.

His patient was trying to become a volunteer firefighter, and Bastian assured the department that his prosthetic was ready for work.

“This kid surprises me. He’s another kid who does not let anything stop him. He comes in with broken things all the time because he uses his [prosthetic] leg to the max, which is exactly what I’d like him to do, “explained Bastian.

Surprisingly, when Bastian looks back, he does not see his experience negatively.

“That made me a stronger person. I would not give up for a second of anything I went through, “Bastian said.

“I would not go back and not change anything. I took this opportunity to do the things I do now and have the life I have. “