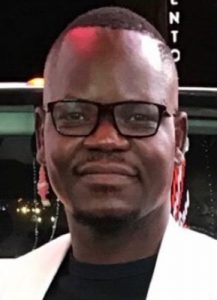 The joy that had marked my 33 years of existence had gone out the window. In a whim. Thanks to a New Jersey Transit train that on a rage, mowed me down chewing off most of what used to be my strong, right leg. I would several days later wake up from a coma at a Trenton, New Jersey hospital to the shocking reality of what sounded like baptism: amputee!

I was informed that doctors chose a conscious medical decision to amputate what was left of my right leg following that misfortune of the wee hours of November 13, 2016! I was depressed. I was sad. I was mad at the world. I was angry at myself for what I thought had been a failure to protect me! I was mad at everything and everybody. I wanted my life back, my leg back. I contemplated death. I didn’t know what a world without what I was given to would be like. I refused to believe that there was any meaning left in life.

For a while, I isolated myself from everyone that knew me before November 13. I kept to myself, listened to my team of doctors’ encouraging words very grudgingly. I hated food or medicine or anything that would keep me afloat. I was creating a small little world in my new reality – but only structured in my mind – waiting to die. But as my two weeks of hospitalization phased out and eventual send-off to an acute-care rehabilitation facility in Long Island, some life started to visit my old self now completely different. I was on the verge of accepting that I could live. That I could defy the odds. That maybe I should remain open to a second edition of my life.

Life around physical and occupational therapy as I tried to weed out the trauma and pain of my situation, wasn’t easy in itself. Many agonies and bitterness. But the therapists were not only passionate about their job but also very compassionate and encouraging.

Dan wasn’t new to Cold Spring Hills Rehabilitation Center in Syosset, Long Island. My physical therapist had informed me a day earlier that Dan would be visiting me on that early January 2017 date to do casting on the limb to begin the process toward a prosthesis. As the casting went on and getting reassurance from Dan that nothing was lost as there was much to expect out of life, came a daunting surprise: this fellow who looked normal, so full of life and here to fix me back to life was also an amputee! As I would come to learn and appreciate, Dan had lived on a prosthetic right limb for more than 20 years!

I was encouraged to get back to life and to live again. I could see someone I would relate to. Maybe, ask the many questions that had now made a home in my mind. A friend whose knowledge would also lead me to the family of practitioners and caring people at Progressive O&P in Albertson, New York. And as this casting thing took shape, with hopes of walking again, I was not hoping for a miracle. I wasn’t even sure I wanted to live. My right leg had been amputated, above the knee. How was I going to accept and deal with pain and disability the rest of my life?

Part of my ability to resume life and quickly learn to walk in my prosthesis has been thanks to the ultimate goal by the team at the Progressive O&P whose aim with every patient I’ve met during my visits, is to get them back to their old lives. It is confusing and intimidating. Why would all these people be interested and invested in the joy of others? After all, amputation has a way of making us helpless cripples who would never lead a normal life again.

A lot of my visits to Progressive are part of my healing, recovery and living. The connection I have with the team and they support, invokes feelings of a visit to a spa. In an environment where the business is to fix the limbless, no one stares, the incoming patients are never thought of as freaks and no one feels sorry for us. We are just fine here.

Getting fitted for a prosthetic leg and being able to stand on it is a day of glory for every patient. It has made me to overly appreciate little things that would evade the radar of notice in my previous life. Like, just the ability to stand at the sink while brushing your teeth, or wiggling in your pants without any help.

Learning to walk again is a painful and tedious process. People approach it with remarkable courage. I saw one woman about to take her first step and it was obvious she was scared to death. In my case, putting on my prosthetic leg has become the most important and memorable undertaking of my existence. It is a time that evokes every emotion; while it affords me the chance to look at life with deep humility and appreciation, it also worries me a lot that there are millions of people around the world who lack the privilege of a prosthetic limb. That a lot of those amputees could be domiciled in their homes and villages, denied the ability to even go out and play, attend church, school or just come out and stare at nature.

Over the course of my prosthetic life, I’ve connected with so many amputees with renewed and varied desires. Some of them would want to do simple things as just being able to travel to their dream destinations, attend a friend’s wedding or get into sports again. As for me, I would like to lend my voice to advocacy for this community of humans and hopefully find ways to help those without limbs to at least get one – stand in it or raise up their hands and lift their arms again.

Eventually, if I get a running blade, I would like to run marathons; I long to yank through the finish line at the New York City marathon someday!