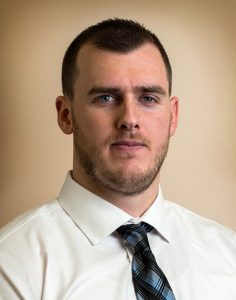 Rob is the newest member of the Clinical Team but began his career with Progressive in 2012 as a college intern.

While obtaining a Bachelors’ in Kinesiology with a focus on Fitness Development from Cortland State, Rob was also on the football team, and this afforded him the opportunity to work with talented speed and agility trainers. While considering career options, he spent a summer interning with his uncle who owned an O&P practice in California. It was during this time he decided the field of prosthetics was his chosen path.

It’s a privilege to spend my days interacting with patients, learning their stories and creating prosthetic solutions that empower them to live their best best lives regardless of their age.

After the summer with his uncle, he joined Progressive O&P as a lab assistant and eventually worked his way up to the fabrication team, all while attending college. Rob’s work was outstanding and was offered a full-time job as a fabrication technician. At this point, he decided to forge ahead and pursue a Masters Degree in Prosthetics and Orthotics from the University of Hartford, followed by a residency with Progressive. After completing his residency he became an American Board Certified Prosthetist in the Fall of 2017. Rob is proficient in fitting Microprocessor Knees (C-Leg™, Genium™, Rheo™), Myoelectric Hands (Touch Bionics Quantum™, Ottobock Michelangelo™, Ottobock BeBionic™), body-powered upper extremity prosthetics, and dynamic response/multiaxial prosthetic feet.

Today Rob combines his technical talent in prosthetic fabrication with his clinical skills, interacting with patients, learning their stories and creating prosthetic solutions that empower his patients of all ages to live their best lives.

Some of Rob’s Patients

Take a Virtual Tour of the Progressive O&P Facility in Albertson, NY

Is The Ossur Proflex XC Right For You? Watch Vidal In Action
«
Prev
1
/
1
Next
»