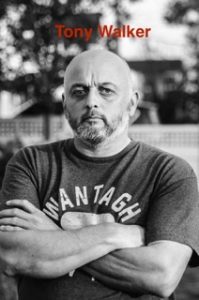 Hi, I’m Tony. Back in 2002 one of the best things ever in my life happened to me….. I was diagnosed with cancer. That’s right, it was one of the best things that ever happened to me. Osteosarcoma, a word I never heard before, was now the word that will forever stick with me. I felt pain in my leg, discovered a bump, went to the doctor a few days later, dropped my pants for the doctor who without even touching me said, “That’s a tumor. Go to the lab for tests.” Turned out I had a tumor wrapped around the outside of my femur. A week later I went for a biopsy, a week after that I was getting my first round of chemo.

After a few rounds of chemo, the tumor shrunk so it was time for the big moment….. surgery. I went through a 13-hour surgery where my whole femur was removed & replaced with a cadaver bone, bones from other parts of my body, titanium rods, screws, I think even some farm animals & kitchen appliances. What a mess! The idea was to have the rods & screws hold everything in place until the bones grew & meshed together. I was told in 9-12 months I’d be back to normal like nothing ever happened. Well, almost 3 years later I was still on crutches, had several surgeries, & in pain almost the whole entire time. How can I have Walker as a last name & not be able to walk???

When I was diagnosed my daughter was only 3 & my son was a month away from turning 2. My poor ex-wife was basically a single mother since I was extremely limited & in terrible pain. The physical & mental anguish was the darkest time of my life. I went to the doctor & asked for an amputation. I didn’t do much research but I knew the prosthetic technology had really advanced in recent years. I knew I wouldn’t be Captain Hook with the peg leg. The doctor advised me to wait on amputation since it’s such a big decision. Six months later it was time to get my “making sure the cancer is still gone” X-rays/MRI’s. During the 3 years since the first surgery the rods & screws broke, the bones weren’t meshing, it was a disaster. I had so many surgeries that the tests couldn’t show a clear picture of what was going on in the leg anymore so the doctors finally agreed amputation was a good idea.

August 17, 2005….. my amputation. I’ll never forget it. While at pre-op I asked the doctor if I can keep the leg so I can get it stuffed & hang it on my wall like a shark or an animal head. The doctor didn’t laugh. If you can’t keep a sense a humor through something like cancer/ amputation then the disease wins. I refuse to let the cancer & a prosthetic leg define me. A sense of humor saved my life.

October 2005….. I tried on my first prosthetic. I know I should think of a way to describe what walking again was like since this isn’t much of a blog without words or descriptions, but I really don’t know how to put into the words the feeling of walking again. Think about that for a second… walking again! Something almost everyone does without a single thought became something I was not only thinking about but was so excited to do! Every once in a while I watch video footage of the first time I went out in public without crutches-I was able to take the kids to a birthday party & participate in a game of dodgeball!!! That is what life is all about folks!

During the summer of 2006, my kids attended a week-long camp at a local Church. At the end of the week, there was a ceremony where the parents can attend. I remember sitting there waiting for the ceremony to begin when I saw a man walk in. It was obvious he was walking with a prosthetic. This was the first time I thought to myself, “There’s a community of us out there.” Also at this time, I was considering looking for a new prosthetist. The one I had wasn’t very good. A friend recommended Progressive O&P so I made an appointment. I’ll never forget when the prosthetist came out to greet me….. it was the same guy from the Church!!!!

Being the same guy from the Church was very apropos because this man is an angel here on Earth!! Dan Bastian & I hit it off immediately. He lost his leg the same way as me, we’re both big baseball fans, we both have a great sense of humor. Dan became a friend, a mentor, an inspiration. If you’re facing amputation just look at everything Dan has been through & what he’s done as an amputee. Through Dan, I learned that life goes on and goes on happily. Dan, Sal, Abe, Bill, Rob, & everyone at Progressive are family to me. They never rush you, they know all about your life, they’re always available to help in any way they can.

When I spotted Dan in that Church & thought about a community of amputees, Progressive introduced me to that community. I became friends with some of the patients, I’ve been asked by Progressive to talk to people facing amputation, & have even volunteered with other places to talk to future amputees. Losing a limb can be hard mentally. Not being able to do some things you used to be able to do can be hard mentally. Talking to others is therapeutic for them & me. It’s good to talk about it & realize things can be so much worse.

My transition back into the real world was not an easy one. Due to all the leg-related issues, I lost my job. Being a lineman can be tough when you don’t have a leg to climb poles with! It was Dan who taught me to not give up. I wanted to keep my job so Dan spent so much time with me, discussing many ideas but nothing really worked. It was time to move on. I was faced with starting a new career which scared me but Dan showed me it was possible. Dan doesn’t let anything get in his way, especially his disability. So I decided to follow my dream of being an actor/performer. Today I run a comedy troupe, host a talk show that streams live on Facebook, & I am the co-host of an internet radio show. I don’t make the money I used to make at my old job (YET!) but doing something I love has made me such a happier person. I do a lot of laughing. I spend a lot of time with fun, creative, talented people. I now have a wonderful woman in my life. My daughter graduated high school last year & my son graduates high school this year. You can’t put a price tag on any of these things. All of this is way more important than a paycheck. I am thankful I survived so I can see my kids grow up.

I hate to sound cliche but I have developed a whole new appreciation for life & I know what’s truly important…. it’s not spending years of your life working at a job you hate, it’s doing something you love & being around the people you love. I never would’ve discovered any of this if I didn’t get cancer and if it wasn’t for people like certain friends, family, the great people at Progressive O&P. And I can live up to my last name!

I hope you enjoyed reading this as much as I enjoyed writing it. I look forward to hearing your feedback, chatting with you, & hearing your stories. Hopefully, you did enjoy it because I’ll be writing regularly!

Tony Walker is the sexiest & funniest man you’ll ever meet. Tony is the most popular person to grow up in Hicksville, NY. Other semi-known people from the same town include Lorraine Braccho & Billy Joel. Tony is the Writer, Director, & Performer in Knock ‘Em Dead Comedy, a comedy troupe who performs audience interactive comedy shows such as murder mysteries, game shows, children’s shows, & more. Tony loves his 2 kids even though they look like the mailman. www.KnockEmDeadComedy.com

An Update for Our Patients Concerning COVID-19