Amaya Williams saw an opening to shoot. It was an opportunity she had waited for her whole life. An opportunity most did not think was possible.

But there she was, playing in front of adoring students, faculty and fans in the Copiague High School gymnasium, everyone watching the flight of her three-point attempt.

The gym erupted. Amaya raised her hands, let the sound of the cheers wash over her, and headed back down the court, her prosthetic legs shaking under her.

“It was my first basket,” Williams said. “I was super excited. I was jumping up and down.”

So were her teammates, who are among Amaya’s biggest fans. 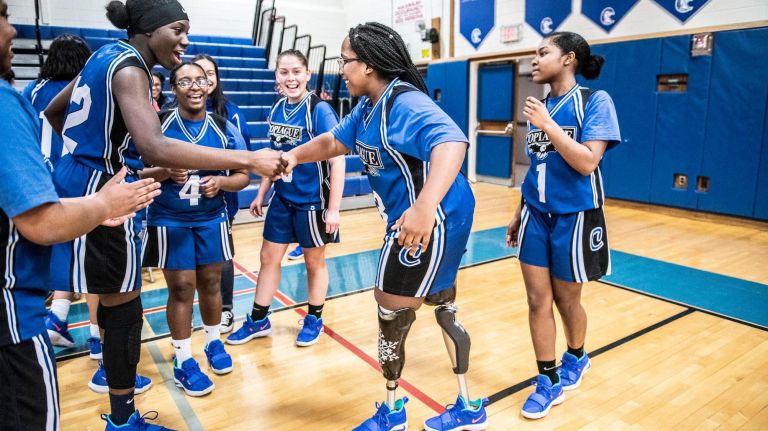 Amaya Williams is congratulated by her teammates after she scored two three-pointers during a game against Riverhead on Jan. 29. Photo Credit: Alejandra Villa Loarca

“When the ball came through the net, I was so excited I ran over and hugged her,” teammate Melinda Harris said. “What a moment for all of us. I’ll never forget it.”

It was an unforgettable moment for Amaya’s family as well. When Amaya was born, her mother, Tanya, was told her daughter would never be able to walk.

“Here I am sitting in a gym watching my daughter play varsity basketball,” Tanya Williams said. “And I can only reflect on all the emotional moments that brought us to this point. And I’m overwhelmed with it all. She’s out there enjoying the game she really loves. She has no worries, no fears. She’s an amazing kid, who knows no limits.

“As soon as the ball left her hands, I knew it was going to go in.”

Amaya Williams was born on Jan. 18, 2002, with one kidney, holes in her heart, a hole in her septum and malformed legs.

“The doctor told me that the good news was her brain was perfect,” her mother said. “The rest of her – not so perfect.

Her right leg was amputated above the knee at 13 months, and part of her left leg was removed just after her fourth birthday.

Amaya has had 16 surgeries and, as she has grown, has been fitted with 22 different sets of prosthetic limbs.

“I started playing basketball when I was four years old after my left foot was amputated,” Amaya said. “I started off with learning how to dribble and that’s when I knew basketball was for me. I would always watch the older kids play and watch their movements and what they did with their legs – to see how I could accomplish it. I never doubt myself with anything I do but when I play basketball I know I’m definitely doing something right.”

Amaya was determined to live a normal life, and with the support of her family — father Michael, a New York City police officer, and her sister Shelby — she has done just that.

“My parents never drew a line,” Amaya said. “It was always whatever you want to do we’ll support you. Karate, dance, swimming, basketball – I was never limited to anything – there were no restrictions. It was all there for me.”

Shelby, who is five years older than Amaya, said she has always been protective of her little sister while at the same time learning from her.

“I would get upset with certain things,” Shelby said, “and she’d show me why it wasn’t such a big deal. I would sit back and watch her just embrace who she is and what she is and be totally at peace with it. She had so much more confidence than I did growing up. You couldn’t measure how much love I have for her — she inspires me every day.”

To play basketball at the varsity level, Amaya would need more than just confidence and determination.

Three years ago, the family met Abe Mathews of Albertson, a certified specialist in prosthetics and orthotics. Mathews fitted her with a C-Leg prosthetic – a leg with a computer — and a microprocessor knee that allows her to recover quickly if she stumbles during lateral movements. 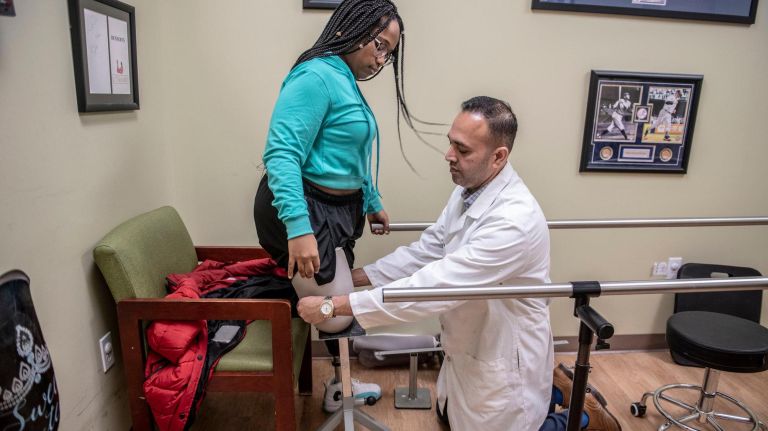 The new prosthetic gave her better movement and helped her master everyday life more confidently – and play basketball at the higher level.

“She was ready to navigate much more easily,” Mathews said. “The new leg would allow her to go from walking to running, and in a step she’s able to accelerate. The microprocessor calculates her gait pattern at 100 times per second to prevent falls.”

With the help of her new prosthetics, Amaya was able to make the Copiague varsity team in November.

“We have a mandatory three-day tryout,” Copiague girls basketball coach Carole Olsen said. “Amaya was able to hold her own in all the skills sessions.

“What she brings, it’s unparalleled,” Olsen said. “When kids are feeling tired or they have a headache, she’ll say, ‘Well, I have no legs, get out there and play.’ It makes everyone else work harder.”

Twelve days after making that first basket against Lindenhurst, Amaya hit two more three-pointers in a win over Riverhead. She finished the season with nine points.  The 16-5 Eagles were eliminated from the Suffolk County playoffs after a 55-53 loss to Commack on Wednesday.

“Amaya has an amazing outlook on life,” teammate Faith McCombs said. “She’s determined to prove she can do things that people said she’d never do. I love being around her because she’s got such a positive outlook on everything. She has a wonderful spirit. The team loves her.” 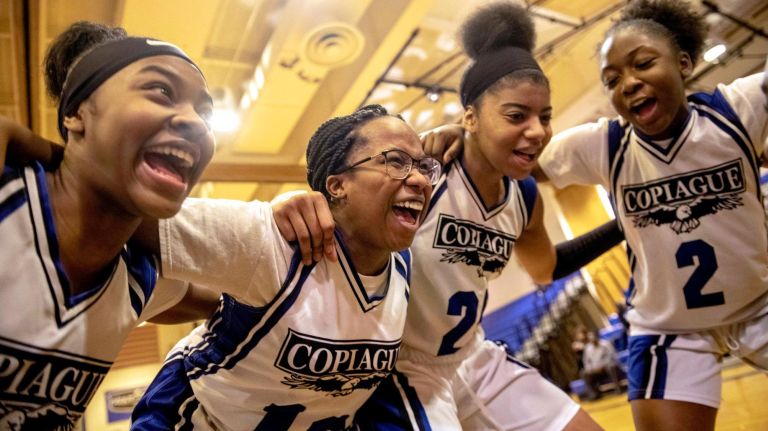 Amaya’s immediate goals are to pass the test for her driving permit and apply to a college to become a physical education teacher. This, her junior year, has been loaded with achievements and dreams come true. Her grades have climbed into the B+ range with college a year away.

“I think about the future and I have long term goals,” she said. “Imagine me, a phys-ed teacher? You can do anything you put your mind to as long as it’s the right time.”

“I can count on one hand the number of bad days she’s had,” he said. “I’ve never seen anything quite like her. She’s the most positive individual and that certainly rubs off on others in our building from students to administrators. She moves in the mainstream in our halls and melds right in with everyone.”

And just maybe, sets an example along the way.