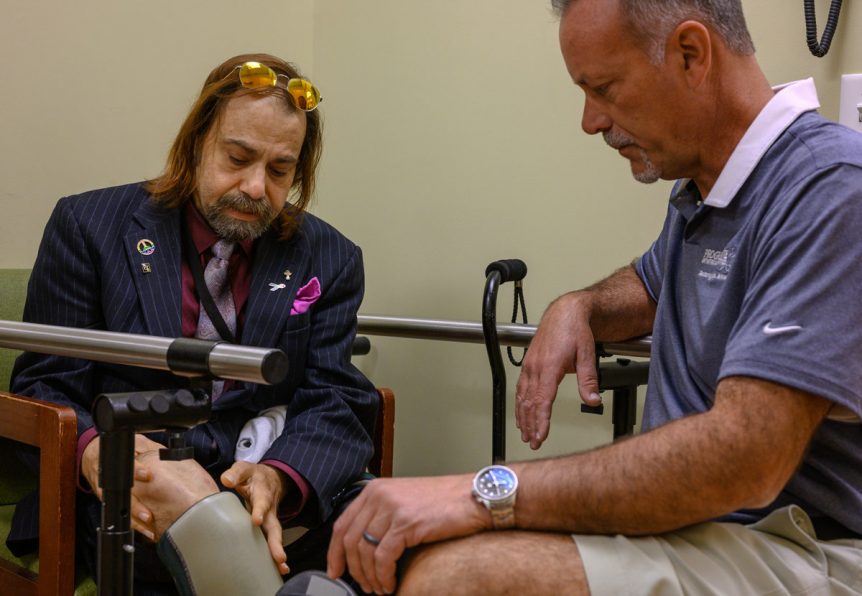 LINDENHURST, New York, May 22, 2019 – Robert “Bob” M. waits for another loaf of bread to rise in his home kitchen in Lindenhurst. He thoughtfully chose every ingredient that went into baking it, lovingly kneaded the dough and can smell the success of his efforts. Six months ago, he wouldn’t have been able to walk over and pull it from the oven. Confined to his wheelchair for four years, many of the things Bob enjoyed doing when he had the use of both legs became impossible. But that all changed when he got his new prosthesis from Progressive O&P. Like his bread, he found the right set of ingredients for success and is confidently rising once again.

We sat down to speak with him.

Fifteen years ago I stepped on a roofing nail in my basement. Being a typical male I pulled it out and didn’t give it much more thought [laughs]. Outwardly, nothing appeared to be wrong, and it didn’t cause me any pain. I forgot about it. Then, two years later, I started having issues with that same foot. It became more and more painful to walk on it. My wife Nina convinced me to go to the doctor. I saw a Podiatrist who quickly determined that something was very wrong. The infection around my right big toe was diagnosed as Osteomyelitis, a rare but serious infection of the bone. They took my toe.

This was challenging, but after my initial surgery, I felt better. Then I started having problems walking again, and this time around clear outward signs accompanied it; there was redness around my foot and I was very sick. I checked in to the hospital and things rapidly deteriorated from there. The infection had moved to my ankle. After three months of unsuccessful treatments, in and out of the ICU, the doctors gave me a choice; let the infection spread or take my leg below the knee.

I took my last few steps on both legs into the surgical room with my head held high. I came out feeling like I would never be normal again.

How did you end up at Progressive O&P six months ago?

After I lost my leg, I went through a painful time both physically and emotionally. My post-surgical rehab went well, but my prosthesis was terrible. It didn’t fit me properly and the materials constantly irritated my skin. I learned to use a wheelchair and became dependant on it, abandoning the poor prosthesis.

To make matters worse, Nina had her own health battle with kidney failure. Although my mobility was limited, I became her caretaker. This was a challenging time; we lost our house and were virtually wiped out financially. Nina’s health deteriorated and she passed away in 2017. Before she died, I promised her I would get out of my wheelchair.

I was angry and my heart was broken, but a fierce determination came over me; I was not going to let this beat me. I began changing my habits, and when a commercial for Northwell Health came across the television, I followed up about their Prosthetic Program. That led me to Dr. Anthony Oreste who then referred me to Progressive O&P. 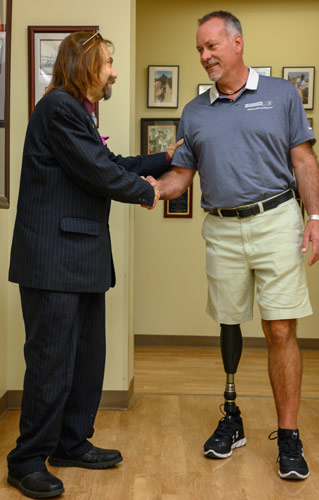 When did you realize Progressive O&P was the right place for you?

My first visit to Progressive O&P was four years after my surgery. I’ll never forget it. As I waited to see Dan Bastian, I heard the voice of a young lady in the other room. She was walking around and complaining about a noise that was barely audible to me. When I came closer to inquire what was bothering her, I realized she was walking not on two legs, but with the help of a prosthesis. Apparently, it was making a noise as she moved about. I couldn’t believe it! This woman walked as though she didn’t even have a prosthesis! That’s when I knew I was in the right place.

What was your first encounter with Dan?

One of the first things Dan said to me was, “Why are you in this chair?”

I replied, “What am I Peter Pan? Am I going to fly around?”

Dan took one look at my prosthesis and said it was unacceptable. No wonder I had resorted to using the wheelchair full-time. Dan knew I was capable of more and I started to believe it too. He got me fitted for a new prosthesis that day.

I received my new prosthesis just three weeks after my initial visit to Progressive O&P. Dan has a shop under his office where he builds the prostheses himself, so not only was the turnaround quick, but the prosthesis was made just for me. It fit perfectly. And Dan didn’t stop there. He helped me set attainable goals and create new habits for success. The next step was physical therapy.

Dan connected me with Kevin Lysaght PT, OCS at First Step Physical Therapy. This wasn’t just ordinary rehab. Kevin specializes in prosthetic rehabilitation and that made a huge difference. He pushed me, and for the first time, I was ready for it. I wanted to get out of my wheelchair. I wanted to get up and run! My program started with me wearing my prosthesis three hours a day, aided by a walker. As I got stronger, I spent more time with the prosthesis and graduated to using a cane. I finally had a properly functioning prosthesis and a PT program that worked.

Who do you consider to be part of your team?

My wife Nina was a big part of my team, and so is my daughter Alyse who moved in to help after Nina died. I’m thankful for these strong, supportive women. My brother Louis is also very encouraging. And God is always on my side.

Now I also have a capable team of healthcare professionals that include Dan Bastian, Dr. Anthony Oreste, and Kevin Lysaght PT, OCS. They have been important rungs on my ladder leading to better health. Before them, I didn’t even have a ladder!

What was the most important thing you received from Dan at Progressive O&P?

Dan equipped me with the prosthesis that helped me walk again, but he also helped restore my confidence. When I met him, I knew things were going to get better. After all, Dan is an amputee himself, and the photographic proof of a “life well-lived” was on his office wall; pictures of him hiking, skiing, dressing up for Halloween as Blackbeard with a peg leg. He had been through it, so I trusted him to help me through it.

What would you say to others that may have given up on prosthetics?

Everyone should have a chance at a full life. Yes, it’s going to be hard, but there’s hope. Find something deep inside of you that helps you keep going and don’t give up. If I can do it, anybody can do it.

What do you plan on conquering next?

I’m looking forward to being a full biped, without the use of my cane. I’d also like to take up dancing and skating again.