AMITYVILLE, New York, March 10, 2020 – The morning sun shines through the window signaling the start to a new day as Joseph O. makes up his bed and readies himself to hit the gym.  Today is “back day”.  Yesterday was “chest day”.  And tomorrow?  Well, you’ll likely find him at the gym then too.  It’s all part of a healthy fitness regimen the forty-something-year-old has followed most of his life.  Joseph’s commitment to working out is evident in his strong build and the weight he is able to curl, bench, and lift.  Even more impressive though, is the fact that he had his leg amputated from the knee down just two months ago, and he’s already getting back to his routine; a recovery time his doctors say is almost unheard of.  But Joseph attributes his success to more than just physical strength.  He also credits his support system, Progressive O&P, and prayer. 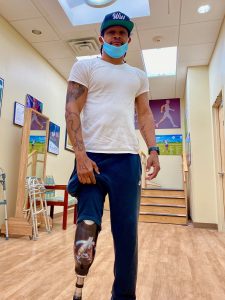 I’ve dealt with diabetes for years.  In December of 2019, a blister appeared on my foot that became increasingly uncomfortable, so I went to the hospital to have it looked at.  Once there, I was prescribed some medication – pills and a cream – then was sent home.  The cream irritated my foot and it started peeling as a result.  When things didn’t improve after nine days, I went back to the hospital.  By then, a bad infection had developed.

Prior to this, I had an operation on my other foot, so I was used to complications, but this time it was so severe that I was told they would have to amputate.  I was shocked that things progressed that quickly in nine days.   I had to lose my foot and my leg from the knee down.

The surgeons performed the operation on Christmas Eve.  I thought my life was over.

How did you end up at Progressive O&P six months ago?

The first time I met Abe from Progressive O&P was shortly after my surgery at Long Island Jewish Medical Center.  My mom actually met him before I did; she’s a very spiritual lady and she had a good feeling about him.  Abe told me he could get me back on my feet; he was confident, and I believed him.  That’s when my outlook began to shift and I started thinking more positively about my future.

Tell me about your first visit to Progressive O&P.

About two weeks after my surgery and following rehabilitation at Glen Cove, I went to see Abe to get sized for my first prosthesis.  Everyone at Progressive O&P was so helpful, positive, and nurturing.  I didn’t even know them yet, but they already felt like family.  Abe was incredibly encouraging.

How did your physical therapy go?

I was ready to get back to my life and make a difference in the lives of the people I work with and my family.  So when Abe gave me my prosthesis, I was so excited.  He said everything looked great, and I went right over to start my physical therapy that same day.  I was new to this; I didn’t know I was supposed to wait before I started my therapy.  I just wanted to get back to normal as soon as possible.

It didn’t take me long to get the hang of using my prosthesis.  I work primarily at a detention center for teenagers with disabilities, and I was back there just two weeks after my surgery.  They didn’t expect me so soon.  My supervisor wanted me to take it easy, so she put me on “light duty”, but I was already able to curl forty pounds on each arm!  So I called Abe and he was able to convince my supervisor I was ready for more.

I’m back to work as usual now with the exception of transporting the kids in the detention center van.  I’m able to drive myself just fine though.  I have a lifted truck and have no problem jumping up into it and getting around town.

How did people react to your new prosthesis?

At first, I didn’t think I would be able to do this, but God is good.  I couldn’t believe how quickly I was recovering, and many of the people in my life were shocked as well.  I work as a barber part-time and I remember running into this girl at the shop right after I got my prosthesis.  I was telling her about my recent operation and how I just got my new leg.  She couldn’t believe it.

I laughed because that wasn’t the first time I got that reaction.  One of my co-workers said the same thing, and a guy I ran into at rehab told me he couldn’t tell I wore a prosthesis because of how well I got around.  I get a kick out of having people guess which leg they think has the prosthesis because most of them can’t tell.

Who has been integral in your recovery process?

At first, I thought I would never get back to life as I knew it, but I had a strong support system that stayed on top of me and wouldn’t let me get down.  When I was admitted to the hospital, my room was flooded with loved ones: friends from my childhood, my kids, Zahla (age 3) and Josep (age 18), my mom Linda, my niece “Muffin”; it was like a club in there!  I loved when my daughter would climb up into my hospital bed to lay with me.  My sister Tanya would FaceTime me every night.  My niece cracked me up when she offered to “bling my new leg out” after the surgery.  They’ve all continued to support me throughout this journey and I’m so grateful for them.

Do you utilize social media as part of your recovery?

When I was in bed after my surgery, I watched tons of videos online.  Anyone who had lost a limb and dealt with something similar was inspiration to me.  I learned how they exercised, walked and climbed stairs, because there’s a definite learning curve.  It really helped me with my own recovery to talk with other amputees.

Now, I hope to motivate others.  I like to share with other amputees that if I can do it, they can too.  Even through the tears, I’m there for them.

You can’t let one thing stop your show.  I feel like anything’s possible and I’m truly blessed.  I’m definitely looking forward to riding my motorcycle again.  I’m just going to get back on it and do it.  Right now, I’m working on building my strength so I can hold my bike up.

What do you say to others who may not understand what you’re going through?

Some people feel sorry for amputees.  I know they mean well, but I don’t like to hear that.  It’s just something that happened that I have to live with.  It doesn’t mean my life is over.

Any advice for other amputees?

I want other amputees to know that you can live a full life!  I do!